With the new century came a steady increase in streetcar service and automobile ownership, accompanied by the growth of bridges, brick streets, and paved roads and highways. By the 1920's, the 3-C (Cleveland to Columbus to Cincinnati) Highway was paved between Mount Vernon and Columbus.

Dan Emmett died at his home in Mount Vernon in 1904 at the age of 88, after a long career as a songwriter, musician and popular entertainer.

Fredericktown, Centerburg, and Gambier had built their own water systems by 1910. Discoveries of oil and natural gas brought new industry to the county, particularly the five glassmaking plants operating here by 1911. The J. B. Foote Foundry was thriving in Fredericktown. In 1912, Albert B. Williams published his new Past and Present of Knox County, Ohio. 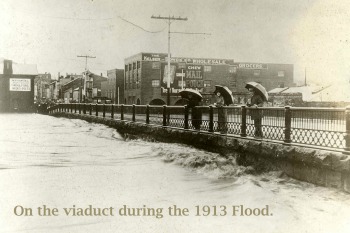 The Flood of 1913 caused great losses throughout Ohio in both lives and property, with many homes, roads and bridges destroyed in the Knox County area.

A new jail was built next to the Courthouse that same year.

World War I began in Europe in 1914, with some young Knox County men serving with Canadian, British and French Units prior to America's official entry into the War in 1917, when many more Knox County boys would serve in Battery E of the Ohio 37th Division in France. Thirty-one of our local servicemen gave their lives in service during World War I. 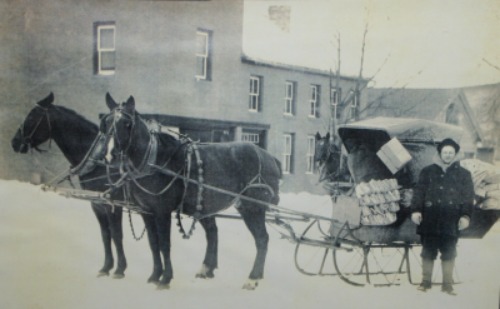 The creation of the U.S. "Rural Free Delivery," or RFD service, led to greatly improved mail service to rural homes in our county and across the country, but it also resulted in the closing of many post offices in the smaller communities. While Knox County had 37 active post offices in the 1890's, that number would drop to just 15 post offices here by the 1920's.

William Fesler delivered the mail on rural routes outside Danville for many years, driving his "mail sleigh" when weather prevented his buggy from getting through.

Rural mail carriers could use their special "RFD" rubber stamp devices to both cancel and deliver letters picked up while on their routes, so some letters might be placed in mail boxes just a few minutes after being picked up earlier on the same route.