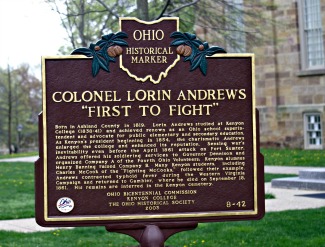 "Born in Ashland County in 1819, Lorin Andrews studied at Kenyon College (1838-41) and achieved renown as an Ohio school superintendent and advocate for public elementary and secondary education. As Kenyon's president beginning in 1854, the charismatic Andrews enlarged the college and enhanced its reputation. Sensing war's inevitability even before the April 1861 attack on Fort Sumter, Andrews offered his soldiering services to Governor Dennison and organized Company A of the Fourth Ohio Volunteers; Kenyon alumnus Henry Banning raised Company B. Many Kenyon students, including Charles McCook of the "Fighting McCooks," followed their example. Andrews contracted typhoid fever during the Western Virginia Campaign and returned to Gambier, where he died on September 18, 1861. His remains are interred in the Kenyon cemetery."