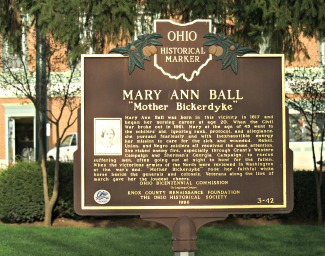 Mary Ann Ball was born between Mount Vernon and Fredericktown in 1817. Her tireless efforts as a nurse during the Civil War brought her the undying love and admiration of the boys she cared for.

The front and back text of Marker #3-42 reads:
Mary Ann Ball (Mother Bickerdyke)

"Mary Ann Ball was born in this vicinity in 1817 and began her nursing career at age 20. When the Civil War broke out in 1861, Mary at the age of 45 went to the soldiers' aid. Ignoring rank, protocol, and allegiance, she pursued fearlessly and with inexhaustible energy her mission to care for the sick and wounded. Rebel, Union, and Negro soldiers all received the same attention. She risked enemy fire, especially through Grant's Western Campaign and Sherman's Georgia Campaign, to rescue suffering men, often going out at night to hunt for the fallen. When the victorious armies of the North were reviewed in Washington at the war's end, "Mother Bickerdyke" rode her faithful white horse beside the generals and colonels. Veterans along the line of march gave her the loudest cheers."

The Marker was erected in 1998. It is located on the north side of Mount Vernon's Public Square.