Mount Vernon's First Major Industry
From 1833 to the Present Day

Knox County brothers, Charles and Elias Cooper, were born on the family farm three miles south of Mount Vernon soon after their father settled here in 1810. In 1832, they tried their hand at operating a coal mine in Zanesville, but they soon became fascinated with the old Davis Foundry there, and they decided to come home and open a foundry of their own in Mount Vernon. They financed their project by selling one of their three horses for $50.00. Their new “one-horse” operation was powered by another horse named Bessie until 1836, when a small steam engine was built and installed to power their foundry. 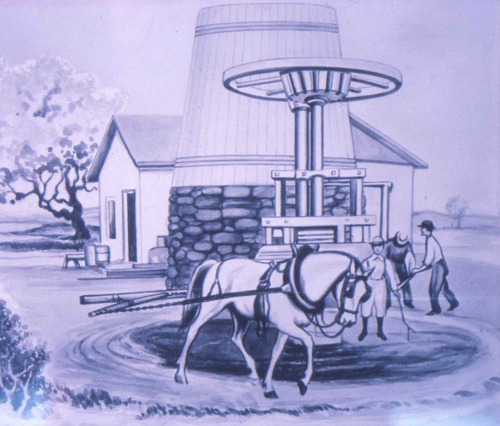 During the 1840’s the company built carding machines, special power machinery, plows and hollow-ware vessels. Beginning in 1846 they also supplied war machinery for the government during the War with Mexico.

By the 1850’s Cooper was building blast furnace blowing engines and a few early railroad steam locomotives, although Charlie Cooper quickly found the railroaders slow to pay their bills, so he turned his attention toward their entry into the competitive world of steam-operated farm engines.

After the Civil War, Charles Cooper brought in new talent that allowed them to expand into producing the efficient, gigantic Corliss type industrial steam engines while they continued to build their standard line of grist mills, saw mills, cotton gins and farm steam engines. 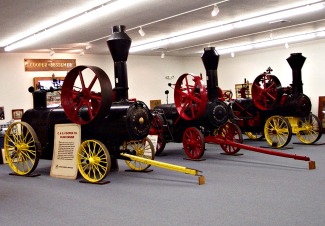 In 1875 partner Colonel George Rogers patented an innovative “bevel gear” attachment, designed to transfer power from the crank shaft of a farm engine to its rear wheels, making it a self-propelled traction engine. The design caught on quickly and was improved even more a few years later with the development of the self-steering mechanism, eliminating altogether the need for horses to pull or steer the large engines. By the late 1870’s Cooper’s reputation as an innovative, reliable engine was established nationwide. By the mid-1880’s, there were more than 1,000 C. & G. Cooper steam tractors were in use throughout America.

The 1890’s saw the C. & G. Cooper Co. move away from farm engine manufacturing, expanding their production of the Corliss engine instead, which was sold to large mills and manufacturing plants. During the early 1900’s, new developments in the natural gas industry led the Company toward increased emphasis on producing natural gas internal combustion engines.

But America’s participation in World War I slowed Cooper’s shift from steam to gas. Our armed forces needed hasty production of large caliber shells, and soon Cooper set up a munitions department which was producing 1,000 three-inch shells daily.

In 1920, B. B. Williams was elected president of the company and presided over many of the important new chapters of the Cooper story.

The Bessemer Gas Engine Co. of Grove City, Pennsylvania, was started in the 1890’s and by the 1920’s had one of the world’s largest industrial plant foundries among its 29 buildings. Their need for additional capital along with Cooper’s need for additional production facilities resulted in the merger and formation of The Cooper-Bessemer Corporation on April 4, 1929.

The negative economic impact of the depression years was lessened at Cooper's by the production of diesel locomotives and the supercharging of marine and stationary diesel engines. Outstanding wartime engine production brought the achievement of the Maritime “M” and Army/Navy “E” Awards. 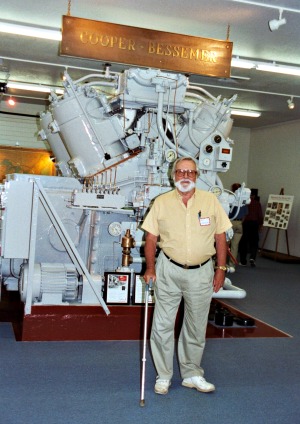 In 1936, Cooper-Bessemer introduced the GMV integral gas engine compressor which was produced for many years at the Mount Vernon plant. This engine, manufactured in four through ten cylinder models, became the most responsive product to scavenging innovations, and it created greatly improved efficiency and increased specific power output. After 1978 these engines incorporated the “CleanBurn” concept technology which greatly reduced nitrous oxide emissions, meeting even California’s most stringent state standards. Over more than fifty years, about 4,660 GMV type units were made by C-B in the United States as well as through licensees in Russia, Ireland, France and elsewhere. The GMV’s were installed in 43 countries worldwide and many are still in operation today.

KCHS Trustee, Mel Helmich, has been a great help in acquiring both small and large Cooper artifacts for our Museum, such as our 70,000 lb. GMV 4-cylinder gas transmission-line compressor-engine. As retired C-B Chief Engineer, he and his colleagues have also been instrumental in our Museum being recognized twice for our industrial collections by the American Society of Mechanical Engineers - a rare achievement indeed.

Cooper-Bessemer’s involvement with rotating machinery began in 1950 with the design and ultimate production of turbochargers for engine use. Soon after, C-B was awarded a contract with the Atomic Energy Commission for 44 special centrifugal compressors for the gaseous diffusion plant at Piketon, Ohio. In 1960 they were the first to introduce a two-stage pipeline booster driven by a C-B power turbine receiving gas energy from a Pratt & Whitney jet-gas turbine.

With these recent company name changes, the Cooper name was no longer associated with the business begun here by brothers Charles and Elias Cooper in 1833. But through the generosity of former and present employees, our collection of Cooper memorabilia continues to grow.

We are especially grateful for the work of the numerous then-current and retired Cooper-Bessemer personnel and the countless others who coordinated the planning, fundraising and construction of our new 2,500 sq. ft. “Gene Miller Wing” for the Museum, which highlights our two large Cooper-Bessemer units as well as all the related photographs, scale models, films and other artifacts that preserve the history of Mount Vernon’s longest operating industry.